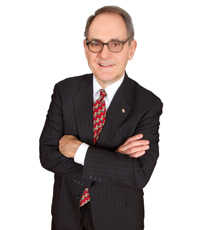 Bob Guehl is a native of Dayton and a graduate of Chaminade High School and Ohio State University (BA and JD degrees). He is admitted to practice law in the State of Ohio and various federal courts, including the United States Supreme Court.

Previously, he served as Assistant Prosecuting Attorney in the Civil Section of the Montgomery County Prosecutor’s Office. In that role, he was primarily responsible for representing Montgomery County in all employment law issues, including Workers Compensation, Ohio Civil Rights Commission complaints, State Personnel Board of Review, State Employee Relations Board, and defense of wrongful discharge and sex discrimination cases.

Bob served eight years as the elected Law Director for the City of Salem, overseeing the legal aspects of the renovation of Salem’s downtown area, among other duties. He also served a year as Staff Attorney, HQ, USAF, Judge Advocate General’s Department, Tort Litigation Staff, in Washington, D.C.

Bob has the distinction to have served in two different branches of the armed forces, both the U.S. Air Force and the U.S. Army, as a Captain, Judge Advocate General’s Corps. He served six years on active duty with the Army in various assignments, and transferred to the Air Force reserves, serving his reserve assignments at Wright Patterson Air Force Base.

He is also a Life Member of the Ohio State University Alumni Association. His former law firm sponsored the Peoples Law School in collaboration with Kent State University. Bob is a proud Member of the Million Dollar Advocates Forum, www.milliondollaradvocates.com, having secured one of the largest settlements in the Ohio Court of Claims on behalf of a lady severely injured in a traffic collision caused by the negligence of a State employee.

Since returning to Dayton in 2006, Bob has served in various capacities on the Board of Directors of his homeowners association (Carillon House Condominium Association).

The National Guard Claims Act - Recent Developments, THE REPORTER, (Office of the Judge Advocate General of the Air Force, Dec., 1979).

Pay no attention to the man behind the curtain… – Issues in trial of Underinsured Auto Cases, OHIO TRIAL, Spring 2003. Co-authored with Janine Avila.