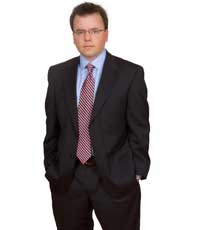 Chad lives in Centerville with his wife, Brooke, and children, Ainsley, Ella and Maxwell.